Blog: Internet of Things (IoT) Manage and control homes to automating processes across nearly all industries

Everything You Need to Know About Internet of Things (IoT)

What is the Internet of Things?

Internet of Things (IoT) refers to the rapidly growing network of inter-connected devices that can collect and exchange data in real time using embedded sensors. It is a concept that involves the usage of physical but internet-enabled devices, between which communication takes place through wireless networks.  These devices could be anything from mobile devices, auto mobiles, domestic appliances like tube light, air conditioners, fans, etc., all interconnected to each other and are able to communicate with each other.

The Internet of Things (IoT) is at the center of the Digital Transformation Revolution that is changing how business is managed and has a great impact on people’s lives. This transformation has impacted everything from how we manage and control our homes to automating processes across nearly all industries. 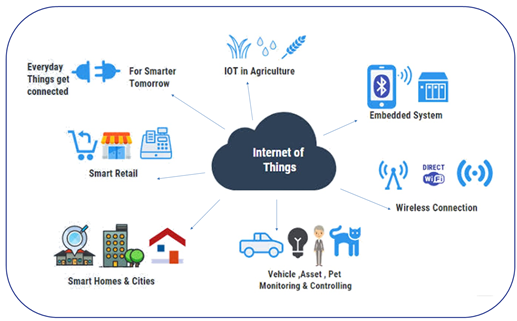 What is an example of an Internet of Things device?

Any object can be a part of IOT network until and unless it can be connected to the internet to be controlled or communicate information.

Several IoT products have surpassed a huge number of humans on this planet because of advancement of technology in recent years.

Approximately there are around 7.9 billion humans on our planet, but to your surprise, by the year 2021 with an increasing graph of IoT devices, there may be around 20 billion IoT smart devices up and running with a rapid development in Iot technology and an increase in the demand of 5g network.

Please refer the below graph for to know the increasing demand for these devices soon: 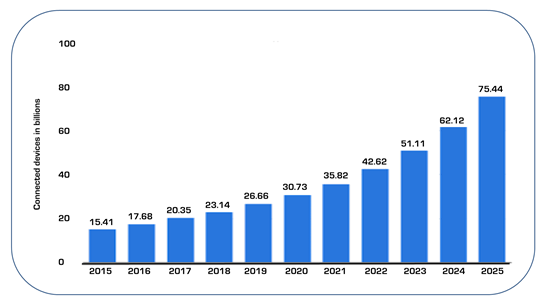 From light bulb to fans to any other home appliances that can be controlled with mobile phone app is a simple example of an IoT Device. IoT device could also be a fluffy toy or a driverless car. Some larger objects may themselves be filled with many smaller IoT components, such as a jet engine that is now filled with thousands of sensors collecting and transmitting data back to make sure it is operating efficiently.

IoT devices is generally expected to have internet connection and they can communicate with each other without human intervention. PC or even a smartphone is not considered as IoT device but other devices such as fitness band or smart watch falls under this category of devices.

What is the history of the Internet of Things?

The idea of adding sensor chips and intelligence to basic objects was discussed throughout the 1980s and 1990s, but apart from some early projects progress was slow simply because the technology was not ready. Chips were too big and bulky and communication tech was also not mature enough.

Kevin Ashton coined the phrase 'Internet of Things' in 1999, although it took many years for the technology to catch up with the vision. In 1999 Auto- ID labs and MIT sought to develop Electronic Product Code EPC and use RFID to identify things on the network. In 2003-2004 the development of projects serving Internet of Things (IoT) idea such as Cooltown, Internet0, and the Disappearing Computer initiative, also IoT start to appear in books for the first time. RFID is deployed and was published on a massive scale by the US Department of Defense. In 2005 IoT entered a whole new level when a report was first published by International Telecommunication Union ITU. In 2008 a group of well-known companies such as Cisco, Intel, SAP and over 50 other members of companies met to create IPSO Alliance, to promote the use of Internet protocol (IP) in something called as “smart object” communication and to activate IoT concept. In 2008-2009 IoT was invented or in other words we can say “BORN” by Cisco Internet Business Solutions Group (IBSG).

The IoT was initially most interesting to business and manufacturing, where its application is generally known as machine-to-machine (M2M), but the emphasis is now on filling our homes and offices with smart interconnected devices, transforming it into something that is relevant to almost everyone. 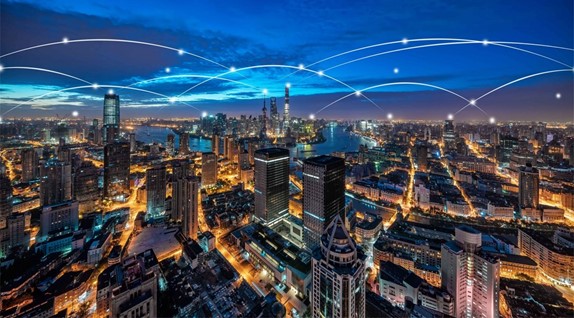 IoT Technology has a wide variety of implementation and use of industrial Internet of Things is growing faster in majorly all the sectors. For each sector, implementation and usage of industrial Internet of Things differs according to the way in which it has been designed/developed. The main issue is with standardization that is it does not have a standard defined architecture of working that is strictly followed universally. The basic flow of IoT is as shown in the below diagram and its explanation about each layer. 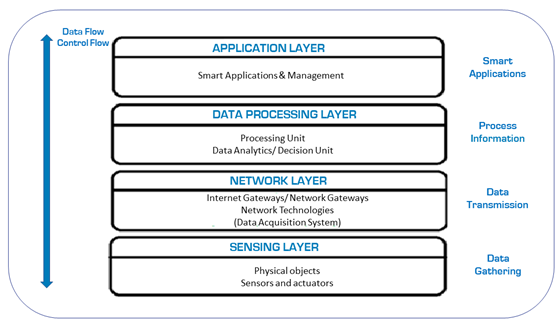 Differences between IoT and Traditional network

IoT technology has started new era in telecommunication technology as it has broken a lot of traditional ideas of network. It can be considered as an extension and expansion of network based on internet, but it is different from traditional network in many ways.

"IoT environment= Internet + WSN" is the major equation and is a common statement that is used to represent IoT environment. To judge and analyze the correctness of this statement, it must be determined the differences and similarities between IoT, Internet, and WSN according to below table. 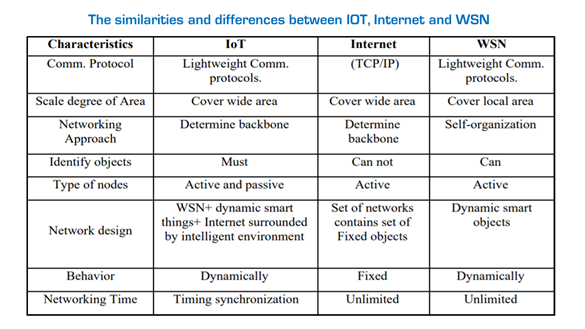 Finally, IoT supports a useful set of features such as self-configuration, self-adaptive, self-protection and interoperability. The intelligent environment is the key to ensure the existence of a minimum level of the various elements that were mentioned previously within the network. 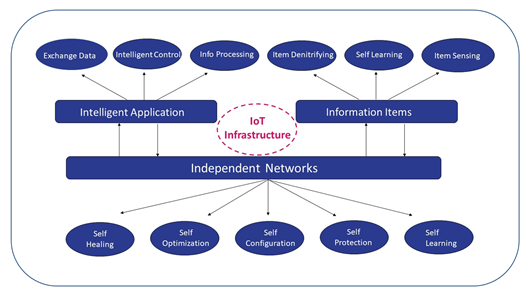 What are the benefits of the Internet of Things for business?

Top benefits of IoT for business depends on efficiency, agility, and implementation. The basic idea is that enterprises should have access to more data about their own products and their own internal systems, and a greater ability to make changes as a result.

Products are fitted with sensors by manufacturers, that can transmit data back about how they are performing. This can track health of each, and every component and it can be fixed if likely hood of it failing increases and that component can be changed pro-actively. Companies can also use the data generated by these sensors to make their supply chains and their systems more efficient, because they will have much more accurate data about what is really going on.

There are two main segments of IoT in enterprise: IoT devices that can be used in all industries, like smart air conditioning or security systems and specific for industrial Internet of Things with implementation like sensors in a generating plant or another example is real-time location devices for healthcare.

While industry-specific products will be in high demand, Gartner predicts by 2020 cross-industry devices will reach approx. 4.4 billion units, while approx. 3.2 billion units of vertical-specific devices is estimated. More devices will be purchased by consumers, but businesses are estimated to be spending more: the analyst group said that while consumer spending on IoT devices was approx. $742bn last year, businesses spending on IoT hit estimation around $1.4 trillion.

What about Internet of Things security?

One of the advantages of connected devices is that it can give your business a real boost, but biggest disadvantage of it is anything connected to the Internet can be vulnerable to cyberattacks.

According to the survey conducted by 451 research, approximately 55 percent of IT professionals list IoT security as their top priority. Anything from cloud storage to corporate servers, cybercriminals can find a way to exploit and manipulate information at many points within an IoT ecosystem. That does not mean you should stop using this IoT technology and adapt a more traditional way. It just means you must take IoT security seriously. Here are a few IoT security tips:

If someone hacks into the computer or smartphone or any other device, control can be lost, and that device can be misused in many ways. This type of hacking in case of smartphones and computers can be done remotely and often undetected. Smartphones are like computers and they carry an enormous amount of personal and private information about their owners. They often link to social networking accounts, bank accounts, email accounts, and in some cases household appliances. Stolen data can result in these accounts getting compromised or even worse. IoT technology is also used in vehicles nowadays, if these systems can be compromised, hacker can take unauthorized control of the vehicle or can get sensitive information of the vehicle.

Through the collection of online activities of users, companies collect this information to create a clear picture about its users. All the user’s activities are being tracked by companies with the help of this collected data. This data is often used to improve user’s experience, but this data can also be sold to other companies or the company itself can use this data to sell their products.

This IoT data and other bits of data can create a surprisingly detailed picture of you. It is quite easy to get huge amount of information about a person from a few different sensor readings. In one project regarding privacy, a researcher found that by analyzing data charts of home's energy consumption, carbon monoxide and carbon dioxide levels, temperature, and humidity throughout the day they could calculate and find out what someone was having for dinner.

IoT devices generate enormous amounts of data; using which we can gather information about an engine's temperature or whether a door is open or closed or the reading from a smart meter. All this IoT data must be collected, stored, and analyzed. Companies feed this data into artificial intelligence (AI) systems that will take that IoT data and use it to make predictions.

For example, Google has put an AI in charge of its data center cooling system. The AI uses data pulled from thousands of IoT sensors, which is fed into deep neural networks, and which predict how different choices will affect future energy consumption. By using machine learning and AI, Google has been able to make its data centers more efficient and said the same technology could have uses in other industrial settings.

IoT evolution: Where does the Internet of Things go next?

As the cost of communications and sensors continue to drop, it becomes cost-effective to add more and more devices to the IoT – even if there's little obvious benefit to consumers. Most companies that are engaging with the IoT are at the trial stage right now, majority of the deployments are at an early stage. largely because the necessary technology like sensor technology, 5G and machine-learning powered analytics are still themselves at a reasonably early stage of development but are improving at a rapid rate. There is a need of specific standards that should be followed by each IoT solution provider but without standards, and with IoT security an ongoing issue, we are likely to see some more big IoT security incidents in the next few coming years.

Due to the rise in number of connected devices, our working and living environments will become filled with different smart products assuming we are willing to accept the security and privacy trade-offs. As the technology will improve these tradeoffs will decrease but still there is a lot of work to be done in this domain.